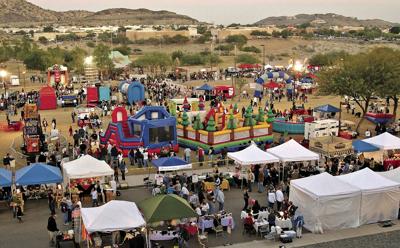 One of the staples of Ahwatukee’s social calendar that appeared all but dead is coming back next month after a two-year hiatus with a different date and vendor focus – but still loaded with the elements that made it a festive occasion for more than two decades.

Some major tweaks have been made to the party – which provides some of the funds for the holiday lights that will be switched in the next week or so on the Chandler Boulevard medians between Desert Foothills Parkway and 24th Street.

And there will be more local artisans and crafters selling their wares – and potential holiday gifts – instead of window installers and healthcare providers handing out flyers and brochures.

But other traditional features of the Kick-Off Party are not only returning but promise to be bigger than ever, according to Festival of Lights Committee President Raphael Isaac and committee marketing specialist Morgan Vanderwall.

“The tavern is going to be larger area this year and we have live music and performances all day from 11 a.m. to 10 p.m.,” Vanderwall said, adding a new Candy Cane Lane will offer more than 30 inflatables for kids.

“We really want to encourage people from the community to come down, bring their chairs, bring their picnic blanket,” she said.

The party provides a financial boost to the increasingly expensive lights display, which is now run by the Foothills Community Association.

The HOA spends at least in $50,000 and the Club West Community Association kicks in $25,000 for all the expense involved in setting up and tearing down the lights display – as well as the electric bill.

But the HOAs’ generosity goes only so far in covering total costs that in the past have exceeded $125,000 – and that are projected to increase by what Isaac said will be “probably a good 15% or more.”

Some of that cost was defrayed by donations by local businesses and individuals over the summer.

The FOL Committee comprises local business owners who were determined to keep the lights tradition alive.

The display was started by homebuilder Del Webb as a marketing tool to attract homebuyers to The Foothills and was picked up by a small group of residents when the company was prepared to pull the plug. Those residents formed the nonprofit Festival of Lights Committee in 1995 to keep the lights burning bright.

The committee raises a portion of the funds for the display with the adults-only Beer and Wine Festival, which Isaac said was a big hit this year – and revived the nearly DOA party..

Two years ago, Isaac had held out little hope for party’s return, especially after city officials preventing large gatherings in city parks because of the pandemic in 2020 and 2021.

But the committee persevered, buoyed by this year’s Bear and Wine Festival success.

“The response from the Ahwatukee community has been resounding with positivity,” Isaac said. “With the two year hiatus, many feared we would not be back for 2022. After our very successful Beer and Wine Festival this summer, there was renewed hope and the feedback we have received since announcing just a few weeks ago has been incredible.”