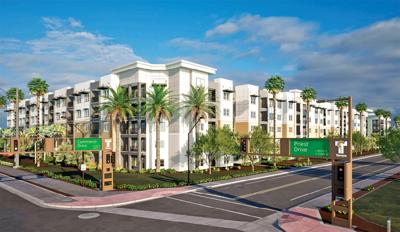 Ahwatukee is getting a big new neighbor just east of the I-10.

Davis Development of Georgia obtained Tempe City Council approval earlier this month of an amended planned area development overlay and use permit for a new 591-unit, five-story multifamily project on 16.8 acres at the southwest corner of Priest and Commerce drives.

The site had been zoned as a regional commercial center and has a mixed-use land use designation. The approved request deals with the northern section of the parcel, while the southern portion will remain commercial under the existing Emerald Center planned area development plan.

The multifamily part of the development will consist of 591 units in two 100-foot-high buildings set up as their own communities with two parking garages, community clubhouses, resort-style pools, fitness centers, open areas with lawn game spaces, outdoor kitchens, shaded seating and firepits.

“The buildings are wrapped around some of the community amenities, while some amenities are located on the roof deck. All amenity areas have inviting open spaces and landscaping to support healthy community interactions,” the plan says.

One commission member also “expressed concern with the trend of taking developable property from the city’s tax base and turning it into apartments,” according to a city staff report.

“He stated that in this particular case, there is plenty of commercial elsewhere in Emerald Center, but he would not want the entire property to be developed with a residential land use,” it added.

According to the staff report, the sole resident who appeared at the commission meeting supported the plan, “stating the need for more housing.”

City records show there were numerous other meetings between the developer and city staff and according to the staff report, “significant comments provided by staff included: provide variation in building frontages along Commerce and Priest Drives rather than long, flat building walls; provide breaks/openings in the buildings; provide exterior shade elements at windows to prevent solar heat.”

However, the report also noted that throughout the hearing and review process, no resident opposed the project.

There was no indication in city records of when construction might start or what kind of rents would be charged.

The project is Davis Development’s first foray in Arizona. Its website boasts a total of 17 multifamily complexes in Alabama, Florida, Texas, Georgia and North Carolina.